IWFS London Branch enjoyed a wine tasting of a wide selection of Red Bordeaux from the 1970s.  The idea was to see whether wines from a decade long ago had lasted longer than had been anticipated. We do this from time to time with Bordeaux and Burgundy fine wines. We are optimistic, but do not know what to expect. Happily we are often surprised and reassured!

We tasted from the earliest through to 1979. All the corks were in good condition and the levels of all looked good. 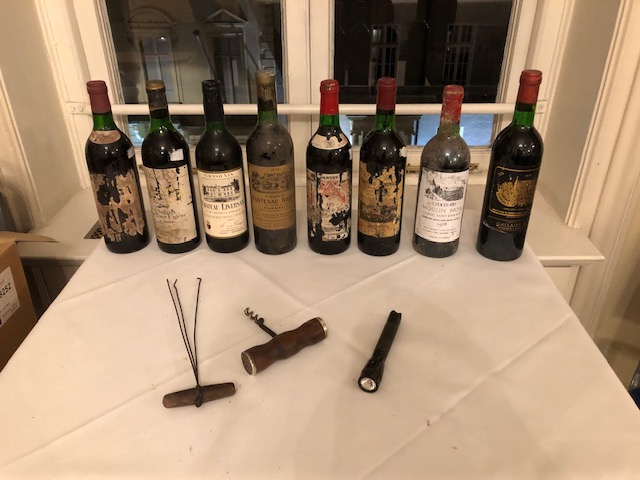 The first two wines were from 1970. This was welcomed as the best year for clarets since 1961, especially since it followed three consecutive bad vintages. The summer was hot and dry, but rain arrived in August, with cooler temperatures. The harvest started late at the end of September, with a large production.

Cotes de Castillon is a large appellation east of St. Émilion, with a clay and limestone terroir, and dominant grape varieties Merlot and Cabernet Franc, as for St Émilion.   Montlanderie is an old property dating back to the late 1800s. It was purchased in 2009, so the wine in 1970 was different from what has been produced since then. For example, it was not until 2013 that any Cabernet Sauvignon was included.   The general advice for this wine is that vintages wine earlier than 2000 should have been consumed. Nevertheless, it was holding up well, still a nice colour, fruit on the nose, soft taste, and drinkable.

This was bottled by Ronald Avery for his family wine merchants Avery & Co.   At the time, the grapes were about 75% Merlot. For the last twenty years, Cabernet Franc has replaced a proportion of Merlot. This wine is now made with bio-dynamic methods.   It probably reached ideal maturity in the late 1990s. Yet it remained drinkable; a darker colour than the previous wine, with a soft violet Merlot nose.

This is a large property next to Pauillac, with a reputation for producing good wines.   1971 was a good vintage, although a small crop. Then, the Liversan vineyards consisted of 49% Cabernet Sauvignon, 38% Merlot, 10% Cabernet Franc, 3% Petit Verdot.   The cork was shorter than the last one, but stayed more or less in one piece. This was a lovely wine, having really stood the test of time. It was a much deeper colour than the previous two wines, just brown on the rim, with a very ripe lovely nose and still a little tannin, and good rich ripe fruit.

From 1968 this vineyard was in the ownership of Comte Bertrand de Villiers on behalf of the Bordeaux firm of De Luze, until it was sold in 1987 to the Compagnie du Midi, a firm from outside the area.  At the time of the 1972 vintage – a cold, wet year – the vineyards consisted of 40% Cabernet Sauvignon (since increased), 30% Merlot and 20% Cabernet Franc (both since decreased), 10% Petit Verdot. The colour was thin and the nose was better than the palate, which showed oxidation and high acidity. 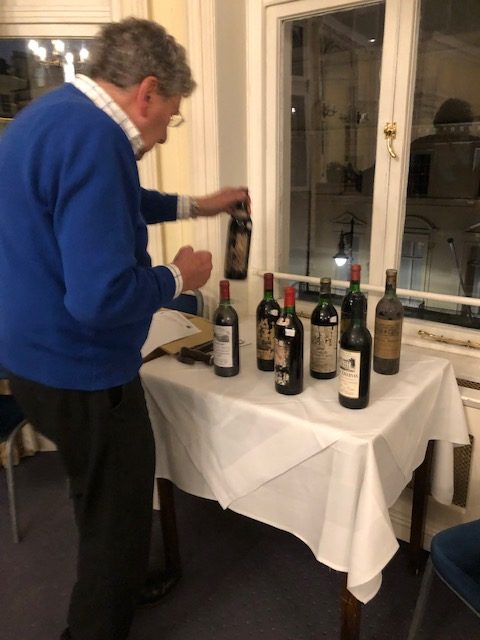 There was much rain in the late summer of 1973, and the wines were light for early drinking.   This is an old property, bought by the Brunot family in 1970. It is situated on high slopes of clay and limestone, which get the sunshine, ten kilometres outside St Émilion. The colour was nice,  but it was losing its fruit and did not last long in the glass.

In the summer of 1976 the weather was very hot and sunny, with no rain. The grapes did not ripen. In the middle of September, the rains arrived, and it was very wet, which did not help, either. However, the vintage came through this, with some elegant wines.   The cépage for this wine is now: Cabernet Sauvignon 40 %, Merlot 40 %, Cabernet Franc10%, Petit Verdot 10 %. The wine of this vintage seemed to have proportionally more Cabernet Sauvignon than this.  The wine displayed good fruit and some tannins, but was beginning to dry out

This was a lovely vintage. The spring in 1978 was cool and wet, but there was sunshine throughout the summer, and excellent weather in September before the late harvest.   This is a tiny property, whose wines fetch high prices at auction. About 60% Merlot, 40% Cabernet Franc. But we found that the wine was losing its fruit.

The 1979 harvest in Bordeaux was said to be the largest since 1934, with variety in weather through the year. The vintage is regarded as easy light drinking, and not for longevity.   However, Chateau Palmer produces exceptional wines. Since the beginning of the 1960s, they have been recognised as being consistently good. This vintage still fetches high prices at auction. The blend is 58% Cabernet Sauvignon, 36% Merlot, 4% Petit Verdot, 2% Cabernet Franc,  The wine lives on. The nose showed aromas of cedar wood and ripe fruit. The palate was less significant with some fruit, some acidity, and drying tannins, but still eminently drinkable.

Thanks to Jeffrey Benson for arranging and leading this tasting.