At this London Branch meeting we tasted a special selection of Châteauneuf-du-Pape from different years and top estates, led by Jeffrey Benson. 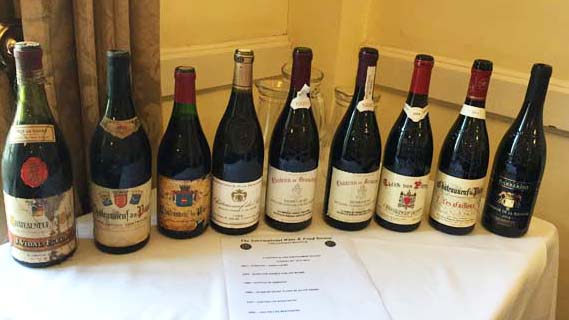 ‘Old Châteauneuf can be sumptuous – complex, spicy and distinctly gamey, retaining much of its original warmth and ampleur’ – Remington Norman.

We started with the earliest and worked forward.

This is the oldest maison du vin in the Northern Rhône, founded in 1781. 1955 was a hot summer, producing excellent wine here, as well as in both Bordeaux and Burgundy.

The levels of this wine were good. Its powerful aroma was of cherry fruit jam. This wine had stood the test of time, but was beginning to dry out.

1959 was another hot summer, producing a great vintage. The grapes would have been very ripe. This wine had survived well. Again a note of cherries, the aroma was sweet, and it was high in alcohol.

This mystery wine had been bottled by a co-operative. It said ‘Frankreich’ on the label. 1980 was not a good year. This wine was characteristically southern Rhône, but was ageing. The nose was of stewed fruit.

This Rhône maison du vin goes back to 1835. 1988 was the first of three consecutive great vintages. The growing conditions in 1988 were excellent. It was a mild spring and hot summer with two rainfalls in July and August. The grapes proceeded to full maturity. This wine is a solid classic style Châteauneuf. It had more than 90% Grenache, evident on the nose, together with some Syrah. Firm, abundant soft tannins, and deep colour. Drinking well.

The original plot of Château De Beaucastel was bought by Pierre Beaucastel in 1549. The property passed through other families and back to family ownership in the early 20th century.  It is one of the largest wine estates of Châteauneuf-du-Pape: ‘One of the finest and most consistent in France’ –Remington Norman. It notably uses all permitted Châteauneuf grape varieties, at least a third Mourvèdre. It practises biodynamic farming.

This was a good comparison to make. In 1993 there was too much rain and not much sun. Tannin predominated in this wine, and the question was whether the fruit would outlive the tannin. It would probably have been better four or five years ago.

The 1996 weather produced a better vintage. The winter was mild and wet, and there was more sun in the summer. This wine was stunning. There was a marked difference in the nose and the lovely depth of fruit. The tannins were balanced. This would have been even better two or three years ago.

This was included in the tasting thanks to the courtesy of a member who brought it along. In 2004 the growing season was late. This wine too is biodynamic. It had not been fined or filtered: 65% Grenache, 20% Mourvèdre, 10% Syrah, and 5% others. It was double-decanted.

In 2013, the growing season was very cold and very wet. The summer brought better weather, but the vintage was late maturing, harvested over a long time, with very low yields. Generally the wine was light in style and with a freshness for early drinking.

The domaine is owned by André Brunel, the third generation of his family, whose history dates from the 1700s. A small number of cases are produced each year and the wine is highly sought after. The vines are among the oldest in the area. The blend is Grenache (70%), Mourvèdre (17%), Syrah (10%), Cinsault (3%), making a traditional style.

The 2014 winter weather was mild, but then came rain and more rain. Better weather in September could not redeem matters.

The domaine belongs to one of the oldest families in Châteauneuf-du-Pape. The wine is 15%. It is composed of Grenache (60 %), Syrah (30 %) and Mourvèdre, with complex aromas of cherry, spice and chocolate and a smooth, full-bodied palate with balanced tannins. It is enjoyable now and will age, although many wines of this vintage, as for 2013, will be for early drinking.

All of us enjoyed the opportunity to consider and compare the different vintages of these fine Châteauneuf-du-Pape wines.