Three contrasting occasions in February illustrate the admirable variety of wine and food events we offer.

The first was a tasting of a wide selection of wines from Moldova, including those made from local grapes Feteasca and Rara Neagra, as well as those from more familiar grapes such as Tempranillo and Chardonnay.   I didn’t know that Moldova has the highest per capita production of wine in the world, and exports much of it, mainly to Russia, so we have not seen much Moldovan wine in the UK. Now the industry is working on quality, and diversifying into wider markets, so we shall be seeing more of it in future.

This was a splendid opportunity to try these wines, and we found them all agreeable and pleasurable to drink. One of our favourites was Negru de Purcari 2013, a famous Moldovan wine: a blend of Cabernet Sauvignon, Saperavi and Rara Neagra. Its superb complex nose was of black fruits, plums and figs, and also spices. Oaked for eighteen months in French barriques, it showed gentle tannins and fruit flavours as for its bouquet. It won a Bronze medal in the Decanter World Wine Awards in 2016. Purcari Wineries Group is a major producer and the largest wine exporter from Moldova.   We were fortunate in that unexpectedly one of the guests was the daughter of a Moldovan wine grower, and she was very helpful in telling us more about the wines and their context.

Roux at the Landau

The second event was lunch in the elegant airy surroundings of Roux at the Landau, which has been receiving excellent reviews since its refurbishment a year ago.   The menu is overseen by Michel Roux Jnr., and the Head Chef is Frenchman Nicolas Pasquier. Andrew Gravett is Executive Pastry Chef, and focuses on desserts that are light yet indulgent.   The cuisine is characterised as refined European, based on classic French techniques and seasonal ingredients. It is described on its website as ‘simple’, but is actually pretty sophisticated. The menu served to us typified this approach. Each of the four courses, combined interesting ingredients and flavours imaginatively, and was accompanied by a selected glass of wine. Service was attentive throughout. Glad we went! 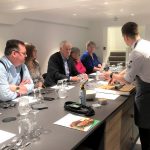 The label of ‘Masterclass’ and the limit of ten participants might make it sound as though we would be actively working hard, but happily there was no effort on our part!   We learned from knowledgeable and enthusiastic professional Josh, at the Toolshed@W2, a shop with a training area. He demonstrated the practice and technique of using sous vide, which works through precision temperature control and vacuum packaging, to cook a variety of foods. He answered all the myriad questions we had as we went along, with clear explanations which were easy to follow.

Some of us were interested in learning so as to use the technique ourselves (one or two of us had already successfully done so); others simply wanted to know more about how it worked, and what food prepared this way tasted like.   We were given a handout with the recipes that were demonstrated to us. The website has an enormous amount of useful information. Equipment could be bought at the shop.

It was great fun as well as instructive, and we finished the morning with a lunch of food that had been cooked sous vide during the Masterclass, with wines to accompany it.

We are certainly thinking of arranging another Sous Vide Masterclass, and indeed Masterclasses in other subjects, as they are informative and entertaining – and we enjoy tasting the results.

Spaces are still available for lunch in April at the Corner Room, at the Old Town Hall in Bethnal Green. This building is now converted into a hotel with restaurants, and is most interesting, both architecturally and for its art deco interiors – and the food is good!

Pied à Terre is an independently owned West End gastronomic restaurant with one Michelin star.  We have always enjoyed our evenings here. The event in June will be well worth signing up for.

Finally for now, do consider joining us in June for the tasting of Wines from Single Grape Varieties. Bernard Lamb has selected exceptional examples of wines made from mainstream single varieties. We are bound to appreciate comparing and contrasting the distinctive aromas and flavours.