“If you see in your wine the reflection of a person not in your range of vision, don’t drink it.” (Chinese proverb.) 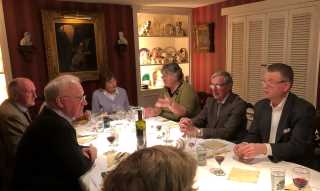 Some fortunate members of IWFS London Branch had an unusual opportunity to learn about a range of Chinese wines, from Christopher Davenport-Jones at his South London home. He had bought the wine at auction, and selected a cross-section of styles and grape varieties for our entertainment and edification.

The label details did not necessarily indicate grapes, vintage or alcohol strength, and anyway were usually in Chinese. Most of the wines we tasted are not currently exported to the UK, so we did not know what they would cost. As so little information was available about them, we were therefore untrammelled in tasting by any preconceptions from our experience – an interesting and novel exercise!

China is the fifth largest consumer of wine in the world, mainly red (both domestic and imported), and one of the largest producers, its growth largely taking place since the 1980s, above all in the last decade.

Wine is produced in several different regions in China, at various altitudes, on differing terroirs and in diverse climates, from around thirty different grapes, both traditional and some local. Cabernet Sauvignon is the most widely planted.

Massive investment is being made in wineries, international as well as Chinese. Wine companies, leading winemakers and other consultants from abroad are being brought in to help develop the industry.

Our first three wines were Chardonnays from the Ningxia region in the north of China, the second largest wine region, which has been expanding its quality wine production in the last twenty-five years or so.

Most wine growing is in a valley of the Yellow River from north to south, parallel to the Helan mountain range, the vineyards being at a high altitude. The climate is continental with hot sun by day and cool nights. The growing season is short. In the long cold winters with temperatures which can reach minus 30°C, the vines are protected by being buried underground.

The region is sometimes said to be the ‘Bordeaux of the East’ for its (very broadly) similar climate generally, sunshine and terroir (although the shorter growing season is perhaps not really ideal for late-ripening Cabernet Sauvignon). Nearly ninety chateaux have already been established here, and the number is growing.

The following three wineries have all been winning awards at wine competitions – in China, Hong Kong and internationally.

The owner of Chateau Hedong, Gong Jie, bought it as an investment in 2010. Its wines have been growing in reputation since.

This straw yellow wine was quite acceptable. Its nose was almost scented, possibly from the type of oak used. It was light bodied, but with a good level of acidity.

The owner of this vineyard, previously an economist, banker and wine retailer, bought it seven years ago. Her aim is to make wine with a Chinese character.

We had different opinions about this wine. Although younger than the previous wine, it tasted older, as if it were on the verge of oxidising, and somewhat bland.

The owner of this estate was originally an architect. His father planted Cabernet and Merlot vines in 1997, which makes them unusually old in China.

Most of us did not find this particular wine enjoyable. Its nose was pineapple and its taste was of ripe tropical fruits. There was some acidity. It was a dry wine, but with rather unwelcome overtones of sweetness.

Next we tried a rosé wine from Ningxia, and a late harvest sweet wine from the Shandong region.

This winery was established in 1998. In 2005, it became a wholly-owned subsidiary of Pernod Ricard. Its brand was re-launched in 2016 in order to increase its market share. It also wins numbers of awards.

This wine was a pretty pink colour, but tasted extraordinarily sweet.

Shandong Province is the largest wine producing region. The Changyu Pioneer Wines company, with wineries in this region and in others, is the oldest and largest wine producer in China, dating from 1892. It exports wines to Europe. At first, grapes brought from the United States, and subsequently from Europe, were not successful and most did not survive. The solution was to graft Chinese plants on to the imported vines. This produced vines resistant to insects, disease and the cold.

Italian Riesling and Chardonnay white grapes are grown here. However, for ice wine, the primary grape variety is Vidal. It is made by traditional methods.
This wine was delicious.

The next four wines we tasted were from the remote Xinjiang region in the north west, far from the ocean and surrounded by high mountains. This is the largest geographical region for wine production in China. Its area is three times larger than France, but includes a vast plain, the Taklamakan Desert – the world’s second largest shifting sands desert – and the Tourfan Depression – the fourth lowest point in the world. The climate varies from north to south of the region, but  generally there is little rain, and there can be strong winds, with hot summers and cold winters.. However, the conditions of low rainfall and long summer sunshine are good for fruit production, especially for grapes (and melons). Here also, vines are buried every winter to protect them from the cold.

This wine was clear through the glass, dry and very sharp. We had different views on whether we enjoyed this. We did agree that it might get better later!

This was an excellent Cabernet Sauvignon, dry with noticeable cherry and chocolate flavours, and smooth tannins.

Chateau Changyu Baron Balboa, another of the Changyu wineries, is situated by the Manas River on the northern slope of the Tiansha Mountain, with gravel soils.

The chateau is built in the style of a very large, extremely imposing French fairy-tale castle with extensive landscaped gardens. Like other recently built chateaux by Chinese wineries inspired by French styles, it has various attractions to welcome tourists. “Balboa” is named after Changyu’s first winemaker, who came from Belgium at the turn of the 19th/20th centuries.

The wine was mainly Merlot with soft plum fruit flavours with a small proportion of Vingang, one of the lesser known local grapes, and it was noticeably oaked. We preferred the previous wine.

100% Cabernet Sauvignon, this wine won a Gold Decanter World Wine Award in 2018. A very likeable Bordeaux-style wine, although with a higher alcohol level. The first taste gave a grip at the back of the throat. Aromas were of oak and dried fruits. Chocolate and liquorice were revealed on the palate.

This wine’s aroma was of blackcurrant and blackberries with a hint of butterscotch. This was a lovely full-bodied wine, with fine tannins.

This was from the same winery as the first wine we had tasted. This had an interesting nose, including cooked fruit, spices, vanilla oak. One description was of a cross between Bordeaux and port.

Following the tasting, we were served a delicious supper. Many thanks to Christopher Davenport-Jones for such an interesting introduction to Chinese wines and an informative learning experience,