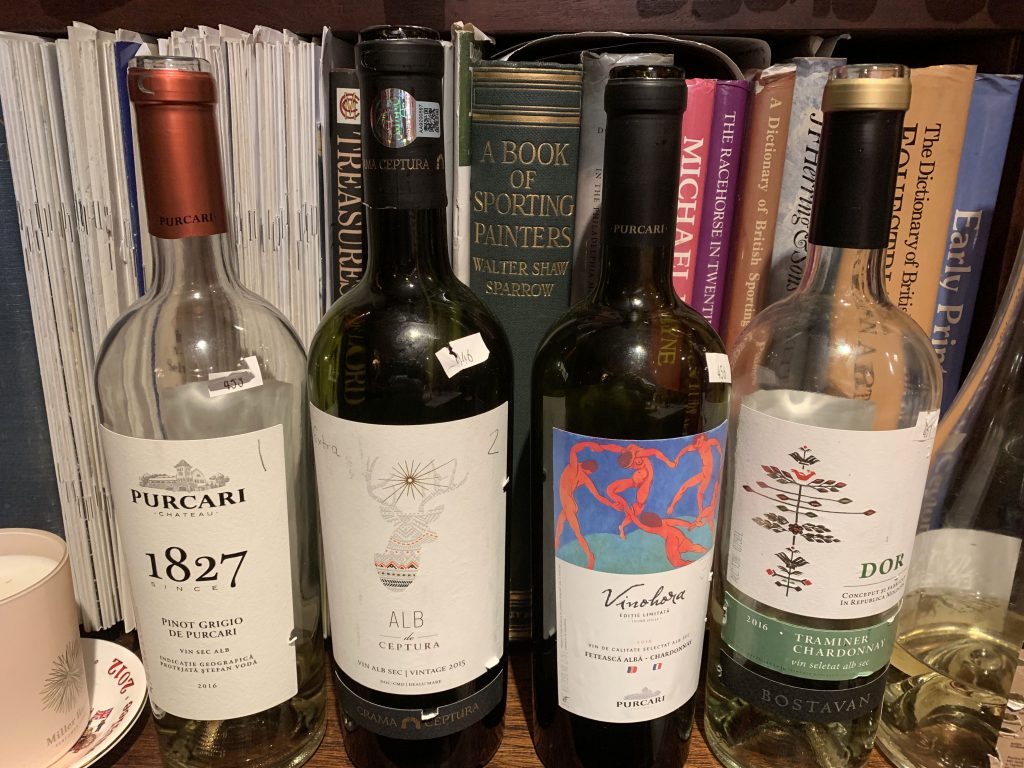 Did you know (I didn’t, until London Branch’s wine tasting) that Moldova has renamed its capital international airport Wines of Moldova? Or that winemaking is its main agricultural activity, measuring 25% of agricultural exports; that it has the highest per capita production of wine in the world; and that 5% of the country is under vine, with 150,000 hectares of vineyards? Another little known fact is that it has the largest wine cellar in the world, stretching for 150 miles, which has made it into the Guinness Book of World Records, because it holds the largest wine collection in the world, of two million bottles.

This was a great start, with a refreshing smoky and fruity flavour, dry with medium acidity, and a clean lasting finish.

Purcari, founded back in 1827, is part of Purcari Wineries, a huge company that also includes the Bostavan winery (see later wines). It exports to over thirty markets throughout the world, and has won many medals at international competitions.

Not much aroma discernible, and no oak, but a fresh, agreeable taste.

Feteasca Alba is a Romanian-Moldovan white grape variety. This wine had an aroma of lychees, fruit on the palette, flavour and character. It was well made, with a hint of sweetness, and easy to drink.

This won a Bronze medal in the Decanter World Wine Awards. Aromas of lemon peel; apple and grape flavour.

Not quite top Sancerre, but good enough! Oak-aged for 6 months. Freshness, a nettle nose, some minerality, melon and a hint of tropical fruit on the palate.

This won a Bronze medal in the Decanter World Wine Awards. An appealing wine, it had sweet fruit flavoured aromas, and a medium dry, soft, berry taste (and a touch of tomato paste!). The flavours were from both grapes. The Merlot provides body and structure, and the Saperavi, a grape native to Georgia, gives deep colour (the name is Georgian for ‘dye’), with acidity and some tannins.

Rara Neagra is planted widely in Moldova and Roumania. It produces fruity light red wines that are high in acidity, but this wine was dark red from the Cabernet Sauvignon. However, from this bottle the Cabernet Sauvignon was not showing through greatly on the nose or taste, although the grapes in this blend are almost 50/50.

There were aromas of dried stone fruits, and flavours of plums and black cherry, with just possibly an inkling of chocolate on the finish. Dry, well balanced and eminently drinkable.

The specific wines we were tasting do not appear generally to be available in the UK. A very rough idea of what they have been selling for in other countries would indicate that the wines up to this point would generally seem to be priced approximately between £10 and £15. The wines that follow may be more expensive, but not by much more, perhaps another £7-£15.

This was a notch up from the wines before, a fairly serious wine. Smoky bacon on the nose, a lot of fruit to taste, quite tannic.

It is a renowned Moldovan wine. We were trying it for the first time – and we loved it.  It is a blend of about 70% Cabernet Sauvignon, about 25% Saperavi and 5% Rara Neagra.

Its nose was superb and complex: black fruits, plums and figs, and also notes of cedar, tobacco and pepper. Oaked for eighteen months in French barriques, it showed gentle tannins, and a palette of forest berry flavours, off-dry and full-bodied. The finish is long and smooth. It was very good all round.

This wine also won a Bronze medal in the Decanter World Wine Awards.

Bastardo is the same grape as the Trousseau from the Jura region in France, and used for port making in Portugal. It makes dark red wines with high alcohol from their sugars and high acidity, red berry flavours

Its aromas were blackcurrant, dried fruit, and a suggestion of tomato (again!). It was easy-drinking, a slight sweetness on the taste, fruity with soft tannins – aged for 12 months in French barriques – and a smooth finish.

To finish the tasting:

This was rosé coloured. Ice wine is a dessert wine made from grapes, the water of which is frozen while the grapes are still on the vine. When the grapes are pressed, there is a small amount of concentrated, very sweet wine. This wine had flavours both fruit and floral, a rich and refreshing finish, and was a lovely balance between sweetness and acidity.

Moldova has had vineyards for thousands of years, and has long been a major producer of wines. It is at the same latitude as Bordeaux, although it has a climate which is more continental, and moderated by the nearby Black Sea.

It became the biggest exporter of wines to Russia, by quantity rather than quality, and became very dependent on Russia.

Now Moldova is aiming to diversify to wider markets and establish a global reputation for its wine, and there has been a huge improvement in quality. We shall be seeing more of it in future – in the UK, the EU, the US and China, and elsewhere.

We were fortunate in that unexpectedly one of the guests was the daughter of a Moldovan wine grower, and she was very helpful in telling us more about the wines and their context.

Very many thanks indeed to Christopher and Marigold Davenport Jones, for this wonderful opportunity to taste 11 wines from an unfamiliar region, all agreeable and pleasurable to drink.  They sourced these wines, hosted the event, informed us about them, and followed the splendid tasting with a 2-course supper, of typical food from the region, centred on goose.