This terrific tasting was held by IWFS London Branch, thanks to the generous donation of wine from Richard Jackson’s cellar. Jeffrey Benson led the tasting to our great benefit. 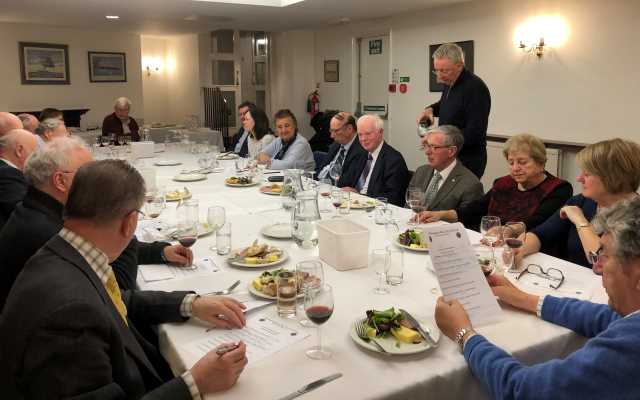 All the wines were from leading Burgundy producers, family-owned domaines with small production, the majority being either Pommard or Vosne Romaneé. They were all classic pure Burgundy style and could be described as harmonious and elegant.  We compared the vintages from 2006 to 2010, with two wines from each year. Jeffrey had arranged the order from older to younger, because the younger wines had more tannin, and we would not have appreciated the softer wines the other way round.

Treat the price I have given with scepticism as being no better than a very approximate guess,  were the wines to be obtainable now in the UK.

2006
Domaine Dujac, Clos de la Roche, Grand  Cru, possibly about £450 ex-taxes
This estate has been owned by the Seysses family since the late 1960s. They started to work organically in 2001, introducing biodynamic techniques and gradually extending this approach to the whole domaine by 2008. The Clos de la Roche holding is in Moray Saint-Denis within the Côte de Nuits.  Jeremy Seysses, co-proprietor, who joined his father Jacques, the founder, in 1998, has described Morey wines as spicy – musk, nutmeg and cinnamon – and having generosity and rusticity, warm-hearted with less silky tannins than further south.

Domaine de la Romanée Conti, Romanée St Vivant, Grand Cru, possibly about £2,000 – £2,500 ex taxes
This wine is acknowledged as top of the range. It was deep coloured, and had tremendous fruit and tannin. It was drinking very well and had longevity.

2007
Domaine Jean Grivot, Clos de Vougeot, Grand Cru, possibly about £120 ex taxes
Clos de Vougeot is the largest Grand Cru site in the Côte de Nuits. It is divided into 100 different parcels owned by more than 80 different producers, and the wines vary in character and quality.   However, the domaine Jean Grivot is regarded as one of the best. Étienne Grivot took over the domaine from his father in 1990. (It is now run by his daughter Mathilde.)  The average vine age is forty years. The proportion of new oak is between a third to a half, depending on the vintage. The wines are produced by organic methods, although not certificated as such. They are bottled without fining or filtration.  Etienne Grivot has described his Clos de Vougeot as a wine with power and energy.  He focused on a concentrated style made to age.

We appreciated this extremely fine well-made wine, a lovely red-purple colour. still young with the fruit closed on the nose, and much tannin in evidence. It was old style ‘farmyard’ taste, smooth and full-bodied, with a long finish. We considered that it would will open up and improve in finesse over the next two or three years. Decant two hours before.

This is a cult grower, all the wines sought after for quality, and also because the sites and therefore production are very small. Most of the vines are over forty years old.
This vineyard is to the left of the celebrated La Tâche Grand Cru. In 2007 the domaine was run by Sylvain Cathiard, the grandson of the founder. His son Sebastien has since taken over.
The wines are bottled without fining or filtration, 100% new oak.
This wine was ready to drink. It had very ripe, well balanced fruit; it was slightly sweeter than the previous wine, with more pronounced fruit and softer tannins.

Domaine Sylvain Cathiard, Vosne Romanée, Aux Reignots, 1er Cru, possibly about £520 ex taxes
We found the quality of this wine to be exceptional. It had a more powerful aroma and better body than the last wine, and will last longer. The fruits and tannins were beautifully balanced, and the wine had great length. Decant for 40 minutes to an hour beforehand.

General advice for 2009 Burgundies is that they became ready to enjoy relatively early, and this showed in the following two wines.

Domaine Jean Grivot, Vosne Romanée, Les Beaux Monts, 1er Cru, possibly about £160 ex taxes
This is ready to drink, with a strong farmyard earthy nose. On the palate a lot of tannin showing – but missing good fruit back up.

2010
Domaine de Montille, Pommard, Les Rugiens-Bas, 1er Cru, possibly about £520 ex taxes
The “Les Rugiens” area comprises “Les Rugiens Hauts” and “Les Rugiens-Bas”, the latter producing better quality. The clay in the terroir is red from iron oxide, said to enhance the redness of the wine and give it a distinctive flavour.    Hubert de Monthille acquired the domaine to add to the holdings he had inherited in 1951. His son Etienne joined him, and then took over. The wines are organically produced and certified. This is another sought after wine. It was very well made. It had a concentrated vegetal nose and was well balanced, with good length.

Domaine Sylvain Cathiard, Vosne Romanée, possibly about £150 ex taxes
This wine was closed and appeared very young. At present the tannins were overpowering the fruit – we wondered whether there would be a better balance given more time?

Please bear in mind that any apparently critical remarks are in the context of comparing wines all of top quality and reputation, and how the particular bottle tasted on this evening!   This was a marvellous opportunity to taste some spectacular wines at their peak and our gratitude to Richard Jackson for sharing them with us.