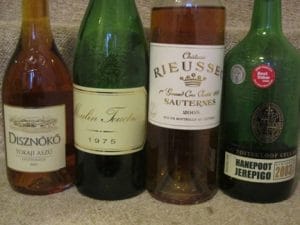 We met on the 9th February at the Naval Club in Mayfair to taste sweet wines from my collection.  I mentioned that sweetness in wines was promoted by hard pruning in winter, by green harvesting (cutting off many bunches of grapes in early summer), by favourable climates and weather, by noble rot (Botrytis cinerea fungus) allowing water evaporation, or by stopping fermentation by adding alcohol or by sterile filtration. My tasting comments seem a bit repetitive because the quality was so high and many of the wines had such similar characteristics. Wine 1 was produced cryogenically, freezing out some of the water from the juice to concentrate flavours, sugars and acids. It wins many gold medals in the UK and abroad. Wines 3 and 10 had stopped fermentations, and wines 2 and 10 were fortified. The rest had enough alcohol to stop the fermentation naturally, leaving residual sugar.

People had difficulty in choosing their favourite wine of the evening, many naming three. Wines 1, 3, 5 and 9 were the most often mentioned. After the supper provided by Brenda Lamb, members stayed happily socialising until well after 10 p.m., very satisfied with sweet wines.