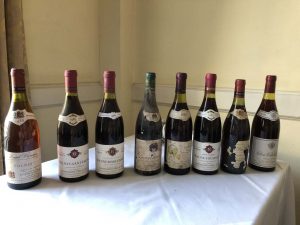 This tasting for IWFS London Branch of Red Burgundies from the 1980s at the Naval Club, Mayfair, was led by Jeffrey Benson, of wines from his cellar, to see how well they had lasted. We tasted the following:

The 1987 red burgundies are light and have matured quickly.

A small vintage. Some delicious to drink relatively young, others maturing much later.

The weather conditions throughout the 1983 growing season were variable, heavy rain and cold in the spring, hail in certain areas in May and July, sunshine from June through August until more heavy rainfall arrived and then more changeable weather for the harvest. Rot developed in some vineyards. So the wines that could be made from this vintage are mixed, some rich and concentrated, some too tannic, most reached their peak a while ago.

A hot summer and a very large vintage. Many wines were pleasant to drink young, but few have aged well.

We enjoyed this opportunity to evaluate and compare mature fine red burgundies from renowned growers.