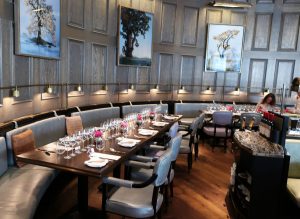 Roux at the Landau restaurant is at the Langham Hotel in Portland Place, and has received consistently excellent reviews since its refurbishment a year ago. Members of London and St James’s branches enjoyed lunch in its elegant airy surroundings.

The menu is overseen by Michel Roux Jnr. The Head Chef is Nicolas Pasquier, and the desserts are created by Andrew Gravett, experienced Executive Pastry Chef.

As we all assembled, our aperitif was water, poured copiously, which must have been very good for us.

The cuisine is characterised as refined European, based on classic French techniques and seasonal ingredients. It is described on its website as ‘simple’, but is actually pretty sophisticated. The menu served to us typified this approach.

Each course combined interesting ingredients and flavours imaginatively, and was accompanied by a 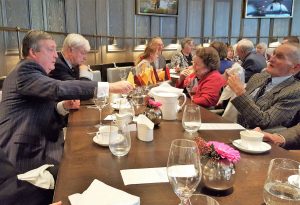 Our amuse-bouche was Isle of Mull Gougère, delicious cheese oozing out of a light surrounding pastry case, accompanied by Gusbourne Brut from New Zealand, which had a light, fresh, faintly lemony aroma, and tasted just as good.

Our first course was:

Crisp Hen egg, a base of tiny pieces of smoked duck, aged Parmesan foam underneath, specks of black truffle, and covered with crisp pastry strips as thin as rice noodles.

It was a lovely combination of flavours. The matching wine was an excellent Muscadet: Chateau de Chasseur, Muscadet de Sèvre et Maine sur 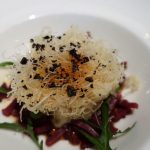 lie, 2014. I’m not entirely convinced that it was the best choice for this starter, as it was very dry, but maybe it would have been difficult to match anything with more body.

The main course was:

The beef was wonderful, slightly salty but that was probably the effect of the Shropshire Blue. The wine served here was Bodegas Amezola, Vina Amezola Crianza, 2015, a typical raspberry taste, and pleasant tasting, but perhaps could have been slightly more powerful for the beef. 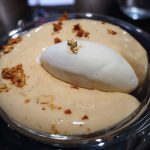 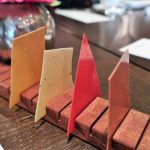 Service was attentive throughout, and all our questions about the menu and the wines were answered promptly and knowledgably.

Many thanks to Persephone Lewin for organising this event for us.