It is some years since Laurent Faure last entertained London Branch to one of his wine tasting dinners at le Vieux Comptoir, so we were well due for a return visit.  This 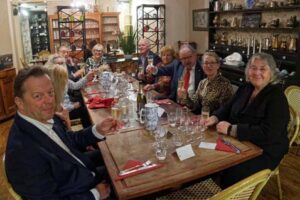 time the wines were from the Savoie region of France.  These are mostly consumed locally, and only tiny quantities ever find their way to the UK.   Those on offer this evening came from Domaine Jean Vullien in the village of Fréterive, well known to some members as they treated an International IWFS group to a superb lunch in their winery during a regional festival in 2016.

The aperitif was a Crémant de Savoie.  Like crémants from other regions, such as Alsace, this is made in much the same way as champagne, although the timings are different.  The region has only been authorised to use this appellation since 2015.  The grapes were 40% Chardonnay, the remaining 60% being the local grapes Jacquere and Altesse.  Those members who go skiing in this region will undoubtedly have tasted them in the mountain restaurants at lunchtime!   It compared well with other crémants that we have tasted.

The first course was a chicken liver parfait, with eau de vie de poire, and was served with two wines, one a Roussette made from the local Altesse grape, and the other a Chignin Bergeron.  Bergeron is the local name for Roussanne, more commonly associated with the Northern Rhone, a 100 miles or so to the south.   The Roussette was fresh and clean, like most of the wines from this region: the Chignin Bergeron more fully flavoured: it is commonly regarded as the best of the Savoie whites.

For the main course we were served Boeuf Bourguignon, accompanied by two red wines.  The first was a local wine from the Mondeuse grape.  This is historically related to Syrah, and the most widely grown red grape in the region.  The second was Pinot Noir – not at all common in this region as it can be hard to ripen in the cold climate.  It is perhaps worth noting that Jean Vullien was a nurseryman, whose main business was supplying plants to wine makers in Burgundy.  By picking his sites carefully: sheltered in the harsh winters and well-exposed to the sun in the summer, he has succeeded in producing some very good Pinot Noir.

For dessert we had an excellent pear tart, with cream flavoured with Genepi, a local liqueur.  This was accompanied by a late harvest Chignin Bergeron from 2009: a very special treat as it is only made comparatively rarely, in those years when the conditions are right.  Whilst most Savoie wines are best drunk fairly young, the late harvest wines keep much longer because of the high levels of sugar, and this one was absolutely excellent, and would stand up well against many from other regions.

Once again an excellent evening, ably hosted by an old friend.